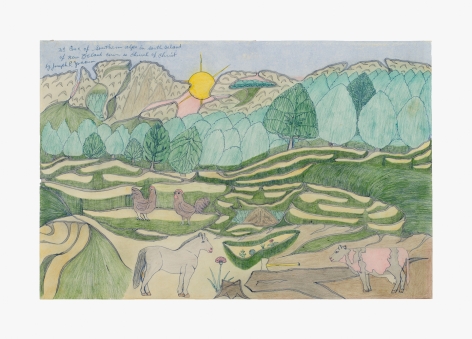 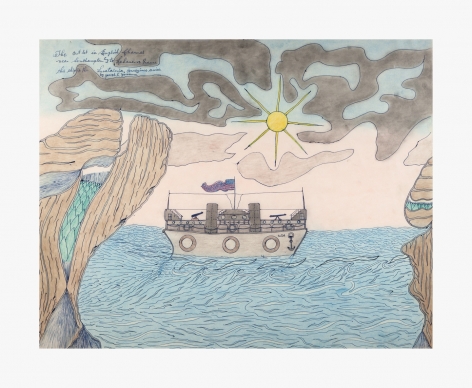 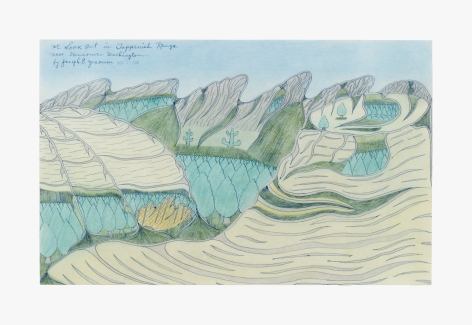 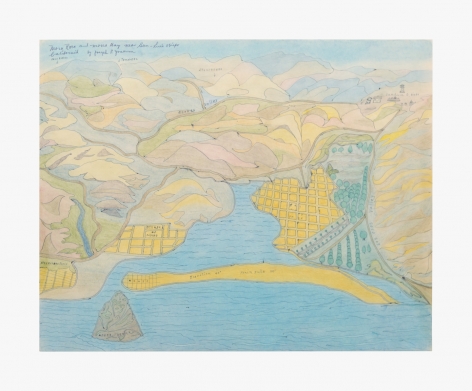 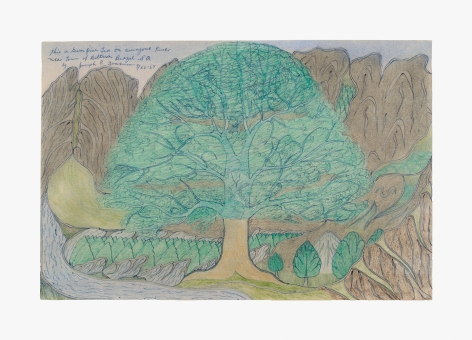 Why Did It Take So Long for the World to Recognize the Genius of Joseph Yoakum?

A cornucopia of over 60 exquisitely beautiful quasi-abstract colored-pencil landscapes by Native and African-American visionary Joseph Yoakum — and that look like they might have been made on Mars — is emitting undulant optical auroras at Venus Over Manhattan gallery. Though under-known and underappreciated, Yoakum’s time may finally have come.

Yoakum was born in Missouri in 1890 to a former slave and a Native American father (he said he was Navajo but was actually Cherokee). One of ten children, at the age of 10 he began working with railroad circuses, Ringling Bros., Buffalo Bill Cody’s Wild West Show, and others. Eventually he was a horse-handler and a billposter, and over his life worked as a miner, on farms, as a carpenter, shoeshine, janitor, mechanic, foundry worker, and in 1918 served in France in WWI. He married twice, fathered children in both marriages, but traveled the world, including to Asia, Australia, and all over America, and hoboed across Canada. In 1962, while retired in Chicago, he had a dream, and at 72 he began to draw. By the time he died on Christmas Day ten years later, he had produced around 2,000 radiant drawings.

In them, you can see strange shapes that look like segmented islands and elephant skin, geological maps and sedimentary core samples marked with nerve systems and erosion; visual calypsos of meandering landmasses, evening rains in lagoons, shadows falling across mystic bays, protozoa and lava that seems to flow into clouds, claw configurations, and biomorphic jigsaw puzzles. All glimmering with prismatic secondary colors. There are repeating curves and forest patterns, rising and falling hills. Notice that things are depicted from all directions at once — from above, below, left, and right. You see the world from a great distance, maybe passing on a train, maybe remembered, maybe made-up, or as tunnel vision. This gives Yoakum’s work a metaphysical feel and recalls shimmering, illuminated Byzantine manuscripts and amorphous Chinese-landscape ink paintings that continually reconfigure themselves into different spaces.

Yoakum never depicts people in his landscapes (although he did make portraits). Yet people have been to, altered, and traveled through all of them. Yoakum wasn’t looking for the end of the world. As a Native American and black man, we see him always looking from a distance to a world he knows well but is never quite in or part of. This is the otherworldly wistfulness that infuses his work — makes it feel a little lonely. When Yoakum needs to populate a farm or field with livestock, he uses images taken from contemporary sources, picture books and magazines. He uses the same cows, chickens, and horses repeatedly.

Yoakum was no outlier in any of this. Henry Darger was using found images in much the same way, and Martín Ramírez and Adolf Wölfli employ some of the same nonnarrative all-at-once space, curving cones and off-world compositions filled with terrestrial phenomena. So-called real artists like Arthur Dove employ flat fields of swelling forms and furrowed fields; Charles Burchfield’s waving world is marked by a similar cosmic glow. Yoakum’s tangled arrangements also conjure the ecstatic confusions of William Blake. Additionally, Yoakum was clearly looking at the majestic black-and-white photos of the American West by giants like Carleton Watkins and Timothy O’Sullivan. Not to mention railroad and circus posters. And his titles are a strange cross between atlas, textbook, magazine caption, and Whitman’s encyclopedic conjuring of the world.

Yoakum has loomed large in my imagination since 1971, when I was 20 years old. That year, I had a teeny space across from the noisy el train in an annex of the School of the Art Institute of Chicago. There, 30 feet from my studio — on the same floor — in the school’s Wabash Transit Gallery, I was permanently imprinted by one of the first-ever showings of Yoakum’s work. I met him but remember only his weathered face, strong hands, a jasmine scent, and something that seemed to hum around him. I knew I’d encountered a life force and glimpsed a kind of aesthetic possibleness. These possibilities multiplied when — in life-changing rapid succession — I saw the first exhibitions of two other newly discovered so-called outsiders, Ramírez and Darger, who lived a few miles from Yoakum and just blocks from my apartment. Suddenly, Chicago was artistic Mecca.

As a Chicagoan, these sorts of miracles seemed common. Our grudging Second City mentally made us develop our own “regional” preferences and tastes. We were always looking in out-of-the-way places, junk shops, on road trips, at garage sales, and most famously every Sunday at the huge outdoor Maxwell Street flea markets where it wasn’t uncommon to hear blues and gospel musicians.

As for Yoakum, in 1967, the year after he took a small storefront studio on Chicago’s South Side, a passing teacher, John Hopgood, saw a handful of beautiful drawings in his window. Beguiled, he went in, bought a few for less than $10. Very soon, Hopgood got him a show in the small foyer at the nearby St. Bartholomew Church. And began spreading the word. Two years after that, Whitney Halstead — who happened to be my teacher and the very same person who organized that 1971 SAIC show — discovered Yoakum’s work and started showing it to Chicago artists like Jim Nutt, Gladys Nilsson, Roger Brown, Christina Ramberg, Karl Wirsum, and others. In turn, they all began to buy and talk about and arrange shows for Yoakum. Finally, a year after my revelation and one month before his death, legendary curator Marcia Tucker organized a show at the Whitney Museum of American Art.

But this was the early 1970s. And while Chicago may have seemed like a new kind of mecca to me, elsewhere the artistic winds were blowing in other directions. Not this one. Over the previous 25 years, New York had exploded with official art movements, including Abstract Expressionism, Lyrical Abstraction, Pop Art, minimalism, conceptual art, video and performance art, and much more. Outsider artists stayed outside. Then post-minimalism and 100 other styles mushroomed in New York and around the world. And when I moved to New York, I suppressed my love for all those artists who’d meant so much to me in Chicago.

I wanted to get with the program and Chicago Imagism, funk, and outsider art weren’t part of that. It hurt. And the art world suffered for excluding so many of these people for so long. It isn’t outlandish to say that artists like Yoakum, Ramírez, and Darger — and many others who were unaccounted for until now — are among the greatest artists of the 20th century. Go see the Yoakum show, and take it from me: Never deny what your pleasure is; always honor your eye; follow your taste. Love will find a way.

View at New York Magazine
Back To Top