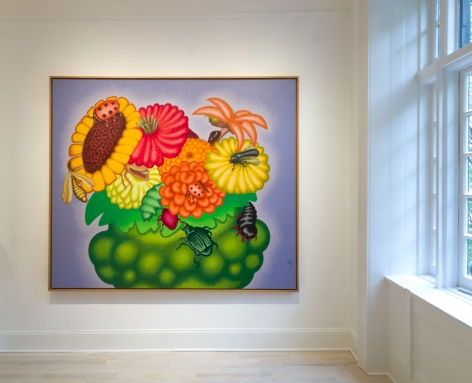 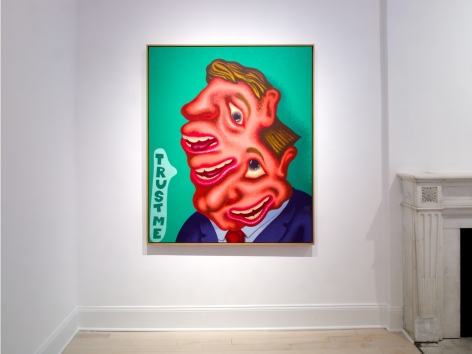 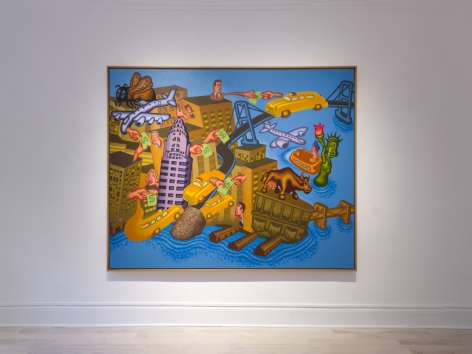 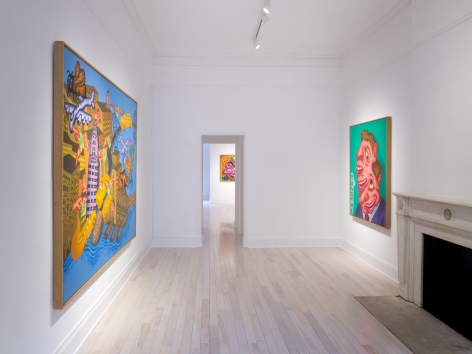 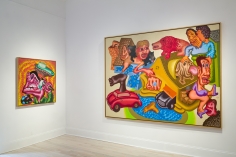 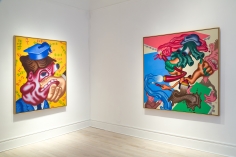 Venus Over Manhattan and Michael Werner Gallery are pleased to announce a joint exhibition of new paintings and works on paper made by acclaimed artist by Peter Saul over the course of 2020 and 2021. Serving as a coda to “Peter Saul: Crime and Punishment,” the artist’s recent retrospective at the New Museum of Contemporary Art, New York, this exhibition elaborates thematic interests that Saul has pursued over the course of his six decade career. Notably, these new works are less politicized than earlier bodies of work by the artist, and instead focus upon formal concerns -- themes and styles -- developed throughout his practice. The exhibition elaborates Saul’s longstanding critiques of official artistic movements and features archetypal characters in vivid paintings that highlight source materials and symbols familiar from his oeuvre. Saul’s new works here foreground his continued relevance as purveyor of a wholly unique, madcap vision, and testify to the outsized influence of his groundbreaking art.

Characteristically fearless in approaching taboos, and replete with his incomparable comic style, the new works in this exhibition show Saul operating at a more intimate scale. They offer specific and succinct keys to some of the most important undercurrents of his influential work.

Saul reflects on both contemporary and historical painting in new works that explore art’s social politics (Woman Artist Painting Three Pictures at Once, 2021) and artists’ relationships to criticism of their work (Have I Got Talent, 2020). Other works on view offer comic takes on classic genres and figures. The paintings Bowl of Flowers with Insects, 2020, and The World is a Bowl of Flowers, 2020, satirize the classic still life—and do so without relying upon the explicit social antagonisms that mark many of Saul’s earlier works. The artist has frequently been drawn to the spectacular hypocrisies of politics, but his trenchant humor and style also have their roots in a criticism of the professional norms of painting. In the course of developing his own signature style, Saul rejected the reigning movement of Abstract Expressionism at the height of its influence. In opposition, he not only opted for figuration, but often appropriated prevailing artistic styles for his own use. In works that completely reimagined Cubism, AbEx, and Surrealism, Saul successfully turned artistic movements—and their critical apparatuses—against themselves to create parodies of artistic convention. Saul’s newest work bypasses the raucous antagonisms of such earlier treatments of his subject matter, opting instead for more vulnerable standpoints.

This exhibition, with its portraits of distorted characters, also captures Saul’s interest in contorted bodies and strange perspectives. The portraits I Need a Drink (2020), Worst Student in the Class (2020), and Last Smoke (2021), restage important symbols within the artist’s oeuvre, such as cigarettes and suburban houses that overtake subjects’ heads. The large-scale Neighborhood Gossip (2020) articulates a caricature of both suburbia and status symbols through a displacement and derangement of bodies. It also serves as an homage to the artist’s decades old Modern Home series. Rendered in a mock-Cubist style, Trust Me (2020) portrays a smooth-talker with a face that bears three mouths. Saul also presents here new scenes of New York City, continuing his long-standing penchant for challenging the sacredness of American icons.

In addition to vibrant full-color acrylic paintings, featured works on paper expose underdrawings that transcend painterly process by furthering Saul’s explorations of comically deranged natures. The artist’s mark-making shadows its core figures, both animating scenes and seeming almost to fight against his works’ structural centers and the solidity of the painted image. 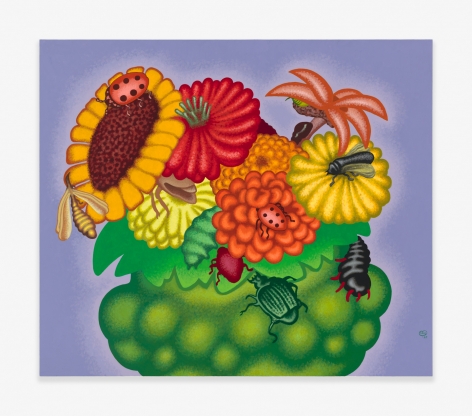 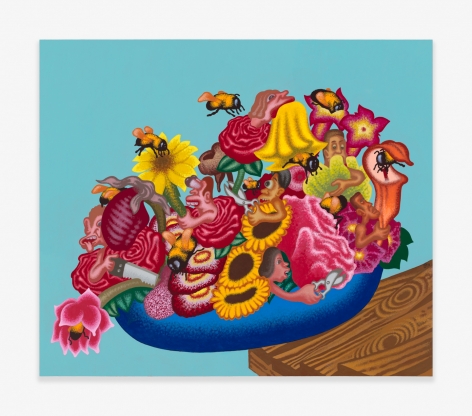 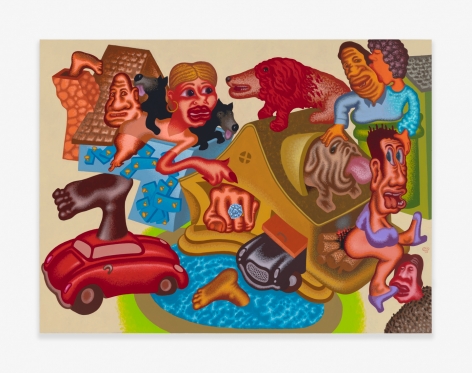 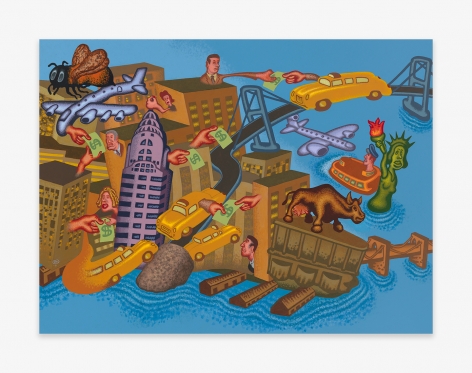 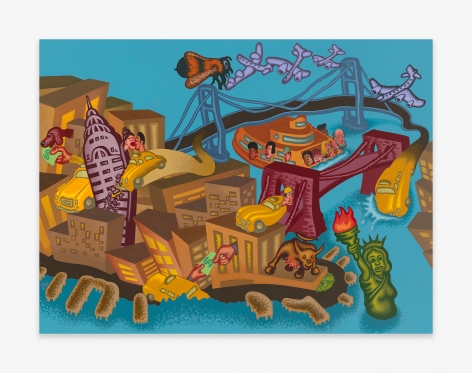 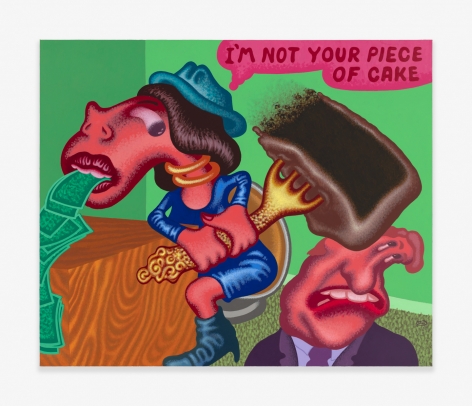 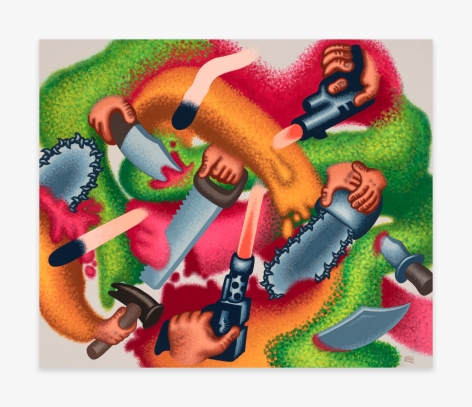 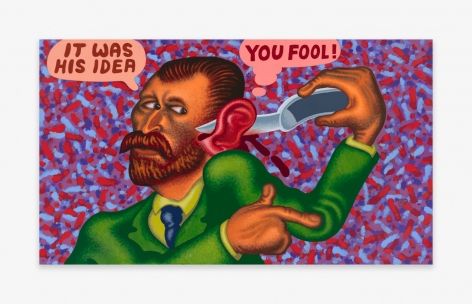 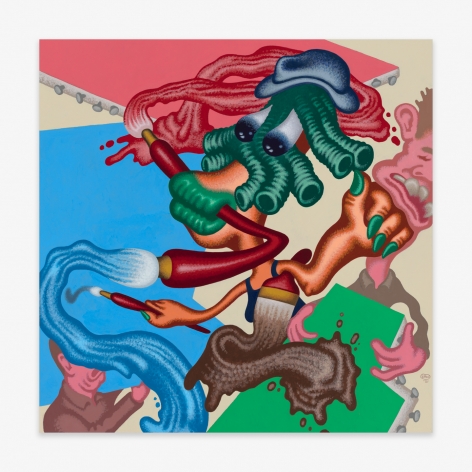 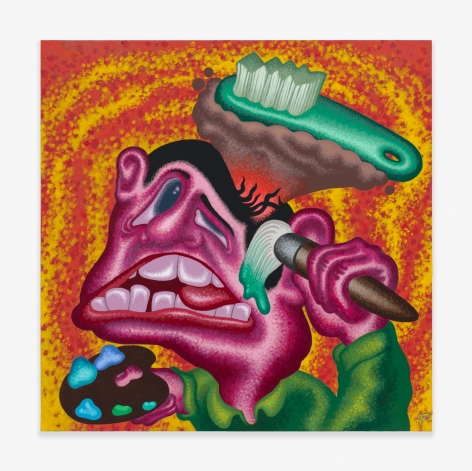 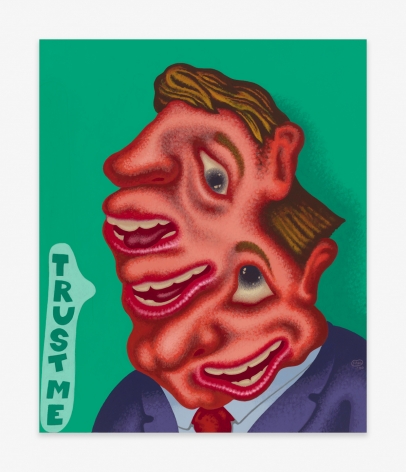 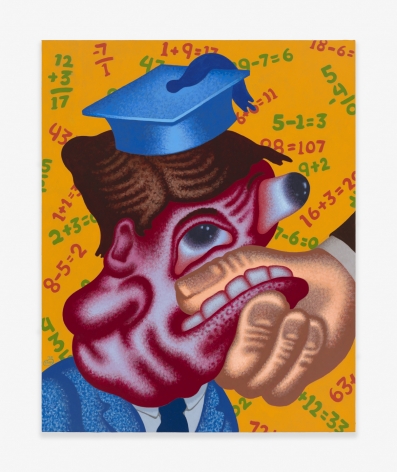 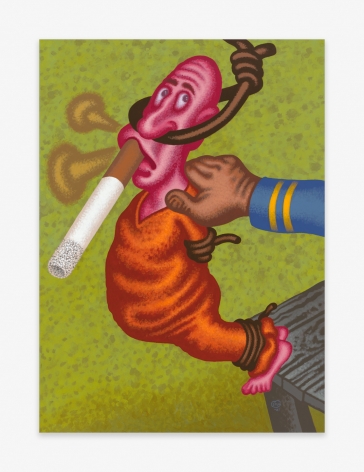 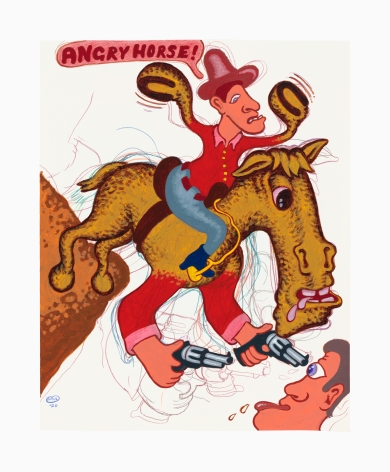 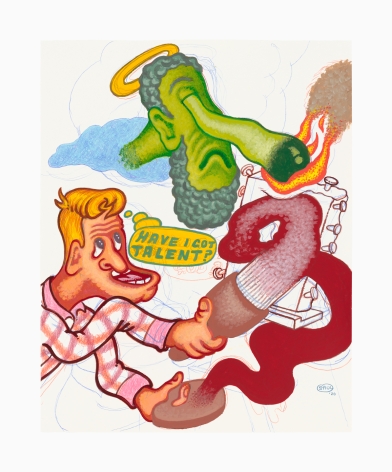 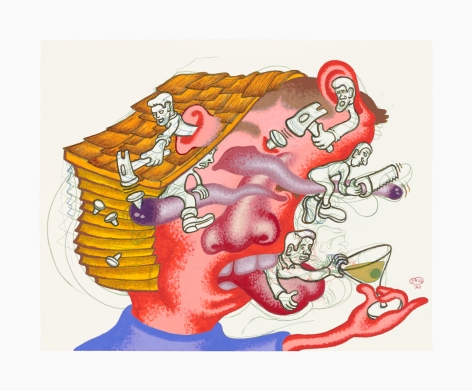 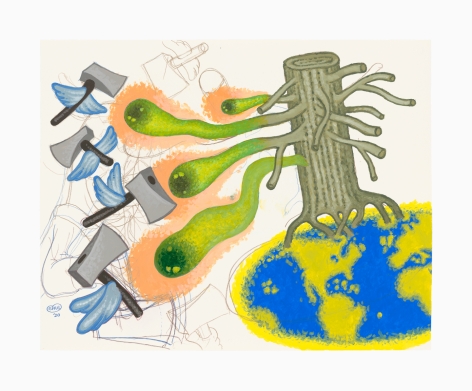 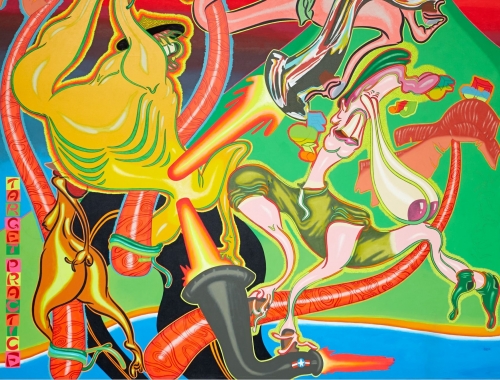 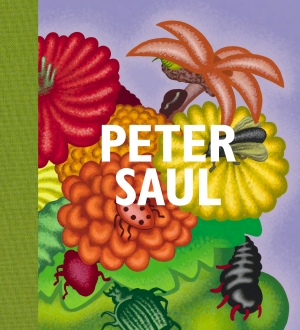 Top shows to see in New York during Frieze week