(New York, NY) – Beginning November 18th, Venus Over Manhattan will present Joan Brown, the gallery’s first exhibition devoted to the work of the late California figurative painter for whom painting was a vehicle for exploration of the self in all of its physical, emotional, and spiritual wonder. Comprising a dozen major paintings, many not seen for decades, the exhibition surveys a particularly productive decade in Brown’s career, from the late 1960s through the late 1970s, and features key loans from the di Rosa Center for Contemporary Art in Napa, as well as a number of important private collections. On view through January 16th, Joan Brown will be complemented by an illustrated catalogue featuring new scholarship, as well as excerpts from archival interviews with the artist.

Joan Brown achieved national notoriety by the time she was twenty-two years old, for work that “melded an abstract expressionist approach to paint handling with her interest in a kind of abbreviated representational imagery.” Separated from her first husband and recently graduated from the California School of Fine Arts (now the San Francisco Art Institute), Brown engaged the heady atmosphere and sense of freedom that San Francisco’s Beat scene and nascent Funk movement provided. In a tight-knit creative community of her peers, including Jay De Feo, Wally Hedrick, Bruce Conner, and her second husband Manuel Neri, Brown made large works with incredibly thick paint that claimed as their subjects her immediate and personal surroundings. She shared with her peers a “mistrust of verbalization and intellectualizing, a disdain for the ways and fashions of the commercial art world, and [a] total and adamant rejection of painting as decoration,” and forged a practice entirely for herself, which recorded in a diaristic manner her ongoing relationship with the world at large. Untrusting of her own increasing renown, and cognizant of her ability to “fake spontaneity” in her paintings, Brown made the radical decision in 1964 to stop working with the thick impasto for which she’d been celebrated. Fiercely independent, Brown “went underground” for the next three years and fundamentally altered her practice, working to become a painter of “control and intention, rather than spontaneity.” 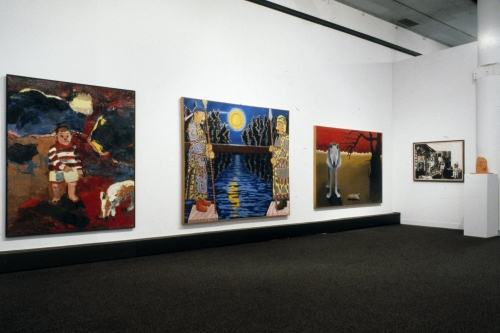 Installation view of "Grey Wolf with Red Clouds and Dark Tree," 1968, at the New Museum of Contemporary Art, New York, 1982.

Venus Over Manhattan’s exhibition begins at the moment immediately following Brown’s hibernation, with a major painting titled “Grey Wolf with Red Clouds and Dark Tree,” from 1968, exhibited publicly here for the first time since Marcia Tucker’s exhibition “Early Work: Lynda Benglis, Joan Brown, Luis Jimenez, Gary Stephan, Lawrence Weiner” at the New Museum of Contemporary Art in 1982. Newly remarried for the third time, and registering the influence of Henri Rousseau, Brown made a series of paintings of animals in stylized landscapes, that “def[y]...the classical standards of traditional figurative painting that are based on conventional subject matter, draftsmanship, and illusionistic perspective and modeling.” The following year, Brown moved with her husband, Gordon Cook, to Rio Vista, California, where she continues to develop an increasingly personal vocabulary of forms, rendered in ever more stylized compositions. 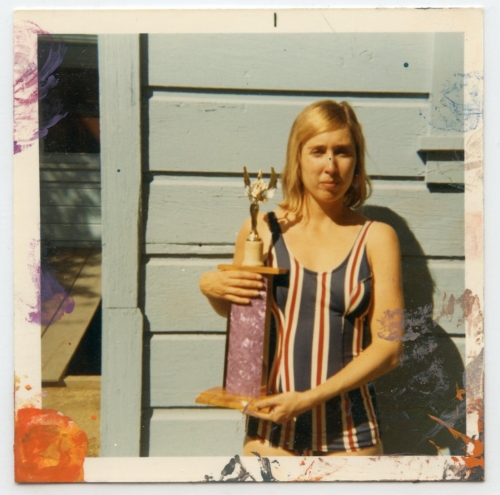 Registering the impact of major shifts in her family life, including her father’s death in 1969, and her mother’s suicide six weeks later, Brown’s paintings became increasingly symbolic in the 1970s, and featured flatly painted compositions with suggestive animals. She began painting on four by eight foot sheets of masonite with household enamel paint and incorporating glitter -- paintings in which she claimed to feel like a “participant,” large enough for her to walk into. Two of these paintings, “Garden of Eden Series #2: Devil Stepping on Fish” (1970) and “Garden of Eden Series #3: Sara as Eve” (1970) feature prominently in the Venus exhibition, foregrounding the symbolic nature of her work from this period. The 1970s also saw Brown center her own image in her practice, undertaking a series of self-portraits in which she features prominently or is represented by a hybrid figure as a surrogate. One of these paintings, “Self-Portrait in Fur Hat” (1972), on loan from the di Rosa Center for Contemporary Art, shows Brown in a signature paint-covered shirt against a starkly checkered background, one of her signature motifs.

When Brown and Cook moved back to San Francisco in 1971, swimming took a central position in her life. She swam frequently in the treacherous waters of the San Francisco Bay, and began working with former Olympic swim coach Charlie Sava, who had an outsized impact on Brown’s painting as well. As the artist’s style continued to develop, Sava “helped Brown clarify her own thoughts about her art as it became increasingly more simplified and direct,” which Brown described as being “about economy, about getting rid of extra stuff.” Evidencing this influence, a pair of paintings from 1973/1974, titled respectively “The Swimmers #1 (Diving)” and “The Swimmers #2 (The Crawl),” are reunited at Venus for the first time since Brown’s retrospective exhibition at the Berkeley Art Museum in 1974.

Brown and Cook loved to get dressed up and go dancing, and as if to commemorate these memories, Brown completed a series of some twenty works between 1971 and 1973 that she referred to as the Dancers series. One of the largest works from this group, “Dancers in the City #2,” a monumentally scaled diptych, features centrally in this exhibition.

Brown’s marriage to Cook ended in 1976, and in its aftermath her work became increasingly oriented toward the spiritual until her untimely death in 1990 at the age of 52. In 1977, she began traveling extensively to Egypt, China, and India, and subsequently affected another overhaul of her painterly style, as seen in “The Long Journey” from 1981. Due in large part to her numerous stylistic shifts, her desire for independence, and her skepticism toward the art world, Brown’s place in the narrative of late 20th century American art has been under recognized, a situation complicated by her regionalist associations with Bay Area Figuration. Together, the works on view at Venus propose a new consideration of an artist who is among the most original and independent painters of her time.

Installation view of "The Long Journey," The Art Institute of Chicago, 1982

Joan Brown was born in 1938 in San Francisco, California. She received her BFA and MFA from the California School of Fine Arts in 1959, and 1960, respectively. Brown’s work has been the subject of numerous solo presentations, including recent exhibitions at the Richmond Art Center, the San Jose Museum of Art, and the Oakland Museum of California. Her work is held in the collections of many public institutions, including the Museum of Modern Art, the Whitney Museum of American Art, the San Francisco Museum of Modern Art, and the Carnegie Museum of Art. Brown died in Puttaparthi, India, in 1990. 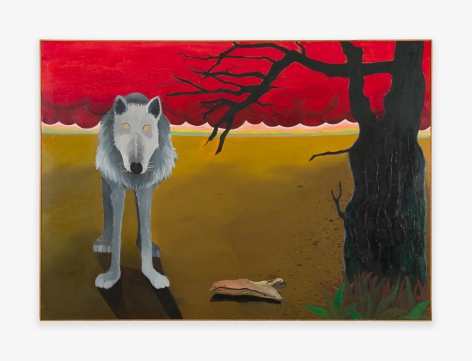 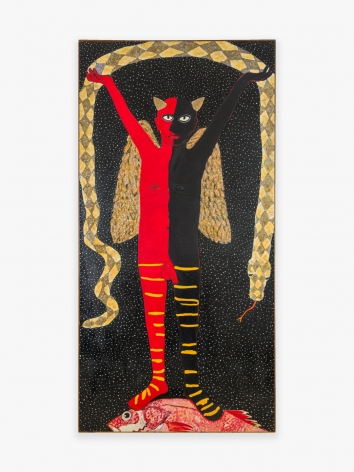 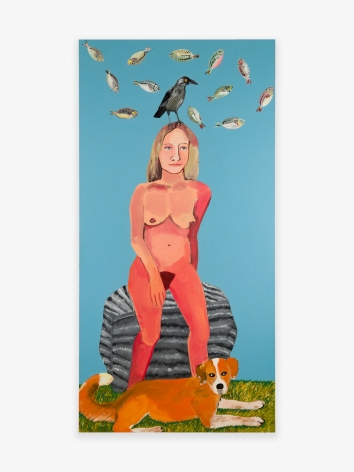 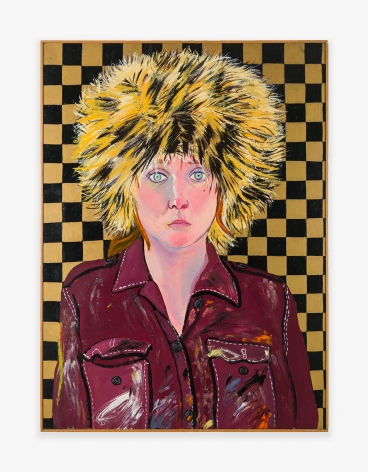 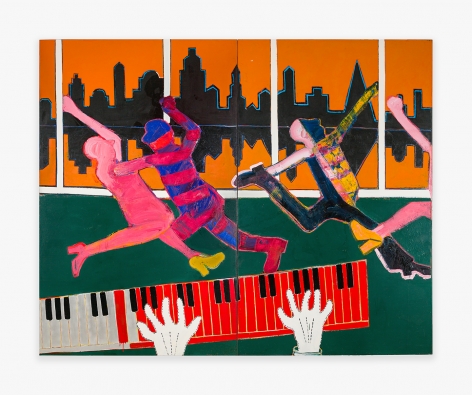 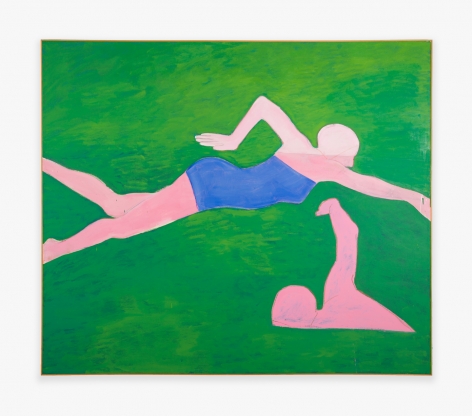 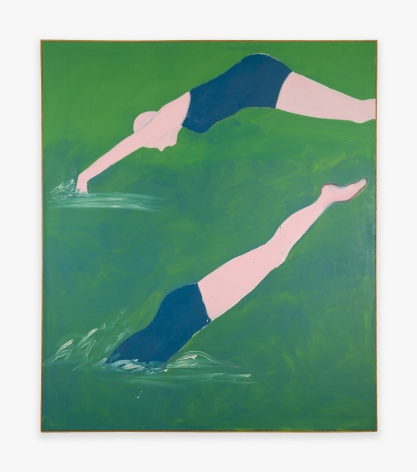 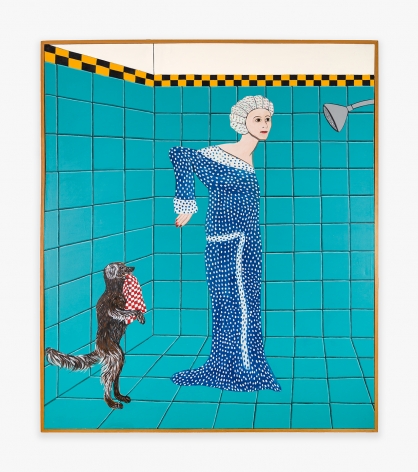 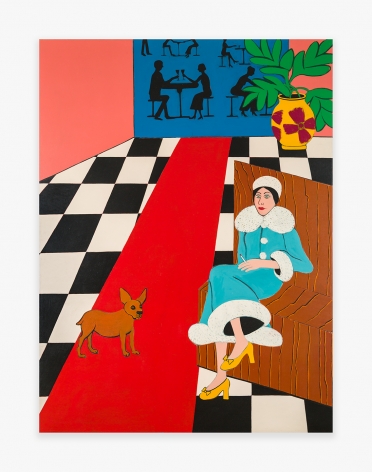 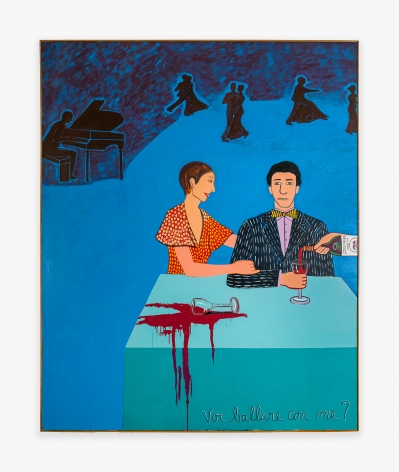 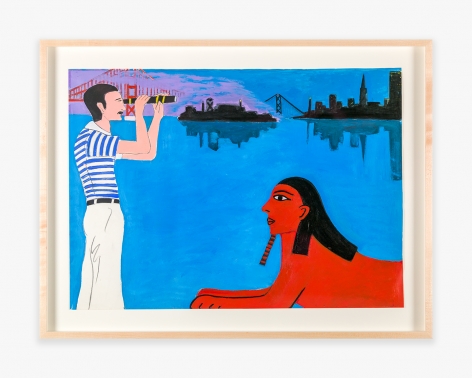 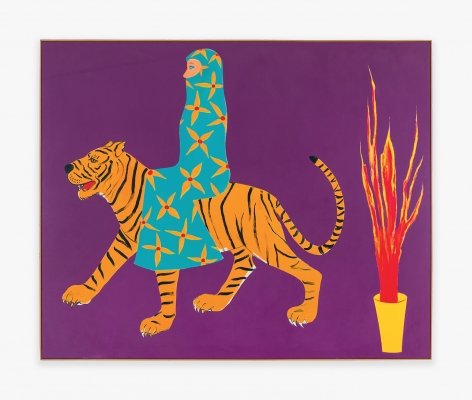 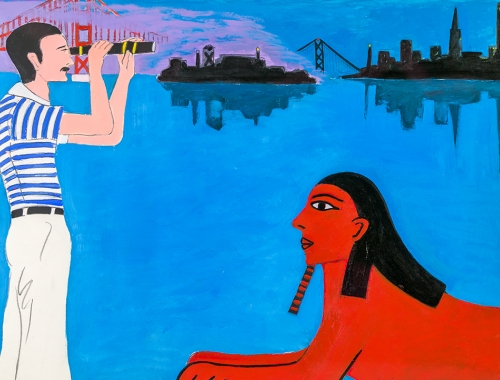 This exhibition at Venus Over Manhattan featured a dozen of Brown’s dazzling canvases, primarily from the 1970s, characterized by dreamily composed scenes and highly stylized figures.

Goings On About Town: A dozen bracing figurative paintings, on view at Venus Over Manhattan, chart a decade in the career of this Bay Area artist (who died at the age of fifty-two, in 1990), starting in the late-nineteen-sixties. 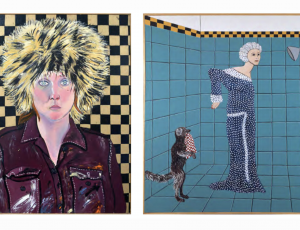 A figurative painter’s vehicle for exploration of the self

Fiercely independent, late Joan Brown was an artist who’s among the most original and independent painters of her time. And under recognized— a sad wrong, that a renowned New York gallery Venus Over Manhattan sets out to right. 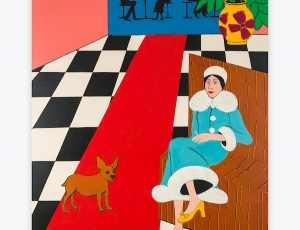