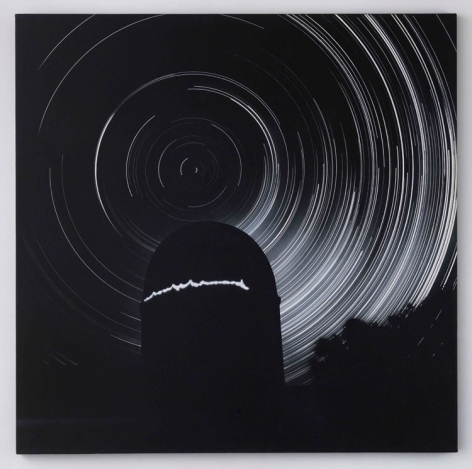 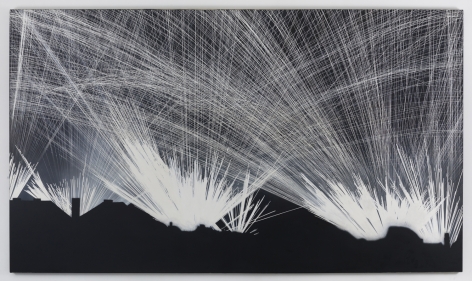 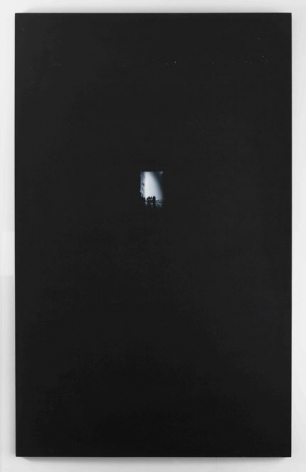 February 2013: Where is Jack Goldstein @ Venus Over Manhattan

The gallery is outfitted like a fallout-shelter might be; cold cement floors and dark grey walls enshrine Jack Goldstein’s large-scale canvases. The walls are stripped of all that might hide their bones, exposed beams read “ GYPSUM PANEL SHEETROCK BRAND FIRECODE.” Goldstein’s paintings are hung in sparse lighting as testaments to the apocalypse witnessed from the safety of a bunker. The paintings, stark in black and white—some swept with blood red—are precise in their brushwork and cloaked in an existential sensationalism. They probe a mania in the viewer’s own mind; when the time might come, what will I mean? And then, should I care?

Goldstein is often described as an artist lost, that is an artist who gleaned mild success, only to turn away from the market’s limelight and hole-up in his own mindful isolation. A major player in the “Pictures” art movement and better known for his short films (one, Shane, a 16mm 3minute film has it’s own room at Venus Over Manhattan) Goldstein was allowed to slowly fade from the art world’s watch as he shifted his focus from film to paint, a shift that did neither aligned him with the photographic images of the other “Pictures” artists nor with the popular Neo-Expressionistic painting of the time.

His paintings are communicative of a fear of the outside—one could huff the fumes of paranoia that hang amidst the canvases—perhaps a fear, too, of the inner-mind. They accost the viewer with disaster, but a disaster so exact it could be traced with a ruler.  Untitled(1982) is one such example. It is arresting in not only its size, but in the light that is created from within. The bottom of the canvas is lined with a residential skyline experiencing electric shock. Sparks project from behind rooftops and chimneys, their offshoots of spark and fire creating a beautiful and ineluctable network of painted light. Like standing beneath a spider web lit only by the moon, the viewer is arrested, transfixed by the fine, bright sparks that illuminate a town under attack.

Untitled 96 (1981), a 96 x 60 inch nearly-solid black canvas is interrupted by a peep-hole size image of silhouetted figures lit by an indistinguishably-sourced radiant light. It’s hard to make out what they’re doing, pulling as what looks like a monstrous cable or hose, even exact appendages are hard to discern. The painting, framed in thick, pervasive black harkens back to a feeling of peering out into a ruptured night from behind the safety of a personal fall-out shelter. When we (as viewers) are placed in this seemingly safe structure, shielded from the collapse of all things known, alone and isolated, we are left to wonder when all else is gone, what will validate our own existence, and then again, did it ever matter?

Goldstein’s grand paintings, illustrative of a mind consumed by monomania, stretch even larger than their canvassed borders in provoking sensations of inevitable and fast approaching doom. The viewer, uneasily nudged with questions of their own significance in the wake of Goldstein’s monochromatic apocalypse, could not imagine leaving a gallery more haunted.

View on Whitehot Magazine
Back To Top