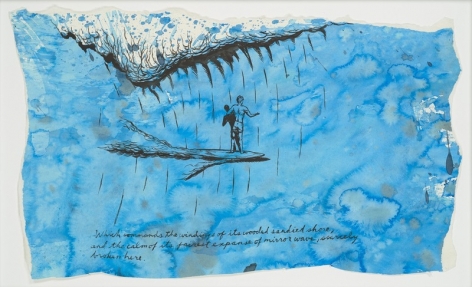 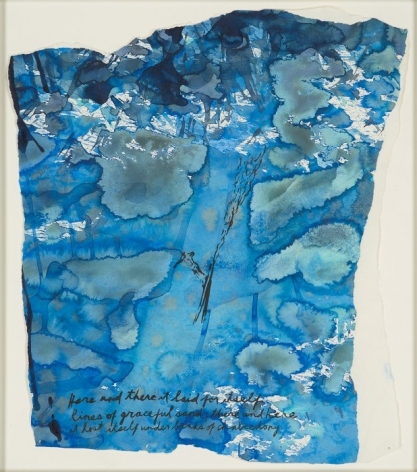 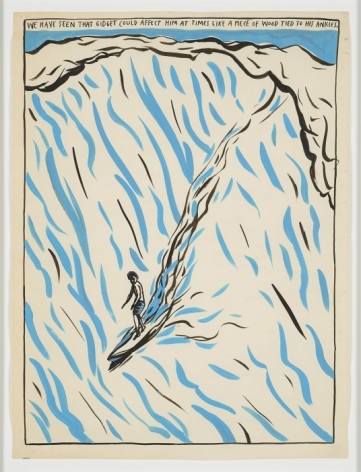 Presently, the walls of the Venus Over Manhattan gallery are covered in every oceanic shade of blue, aqua, and green, drenching the concrete space with waves of intense cool. More than forty frames—some larger than chalkboards, some the size of table menus—fill Are Your Motives Pure?, an exhibition comprised solely of the surfer paintings Raymond Pettibon has made since 1985. Somewhere in the all the watery pigments small figures make their way across massive curls. Poised and up against enormity, Pettibon’s surfers suggest the exhibition is as much a testament to human (and artistic) isolation as to the beauty of endless summers.

Although extensive and quintessential of Pettibon’s style, his stock of surfer paintings is somewhat of an aberration in his overall oeuvre. During the 1970s, he began designing album covers and flyers for his brother’s punk band in L.A., a practice that spiraled into covers for major bands (Sonic Youth, for one) and generated an artistic style that reflected this scene accordingly. Most of his other works are black-and-white cartoonish ink drawings and paintings with a line or two of handwritten text atop. With their dark undercurrents hidden under laid-back humor and pop culture references, it’s difficult not to compare them to sophisticated comic book scenes.

His surfer paintings, however, are intense in their ability to soothe, with water-washed ink strokes arching and swirling into all different shapes of water (because no two waves are the same). The movement captured in each piece seems effortless, not unlike that of a good surfer; both share a sense of mastery of a skill that comes from patient practice and respect for outside forces rather than attempts to control them. Pettibon clearly shares the philosophy and mindset behind the sport. In No Title (Here and there) a tiny, muscled man rides almost vertically down parchment soaked with turquoise ink clouds dripping into one another to form a massive wall of water. He’s been known to not care about mistakes that occur during his artistic process—his dog peeing on his paintings, for one—but the end results could not look more perfectly natural.

The text scrawled on each piece deserves adequate attention too, as it adds an entirely new emotional component to the works. Pettibon is as erudite as they come. He pulls phrases from authors such as Henry James and Nathaniel Hawthorne, alters them and weaves them with words of his own to create short poetic blips that come off somewhat like insights into the surfer’s dream from the night before. Some sound like well spoken surfer jargon: “The lower half of the water wall is shrouded in the beam of the boiling gulf—a veil never rent nor lifted without high and deep reckoning.” Some are simple, blissed-out thoughts: “What more could I have wished?”

Pettibon has had major retrospectives at major American museums and plentitudes of exhibits worldwide, yet he still maintains a cultish touch to his public persona. He is known to mess with journalists who interview him; he intentionally annoys picky followers by adding extra letters to words in his Tweets. For all his fame, his work is still casually accessible in an aloof sort of way, like the catalogue of a pop star that never goes on tour. He does his best work when he’s alone. Although he’s never surfed himself, there’s a tangible sense-of-self put into the figures riding across his waves.