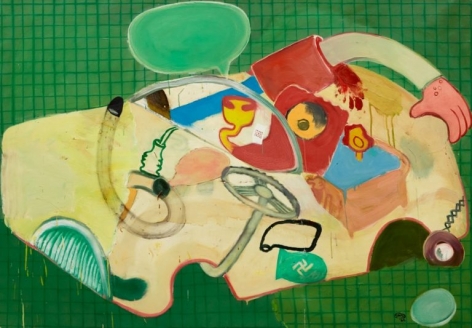 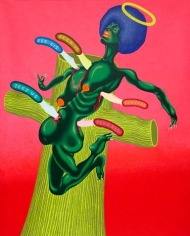 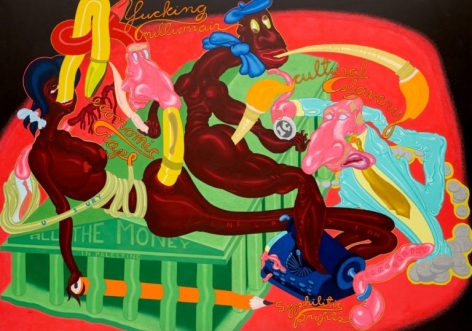 Vintage Violence: Peter Saul on a Show of His 1960s Paintings at Venus Over Manhattan

“A lot of these I haven’t seen since I sent them off!” the painter Peter Saul announced as he walked briskly around an exhibition of his work from the 1960s and early ‘70s at the Upper East Side’s Venus Over Manhattan gallery. He went from painting to painting, giving them quick once-overs. “Very nice indeed, I’m pleased to see it,” he said.

The 21 brilliantly colored paintings and drawings in the show, “From Pop to Punk,” which runs through April 18, overflow with sex and violence. They are brutal, sinister, and dark. Cartoon U.S. soldiers blast lasers into and kick caricatures of Viet Cong fighters, a dog wearing a Superman cape licks a toilet bowl, and voluptuous men and women with spaghetti-like anatomy engage in myriad impossible sex acts.

“There’s nothing responsible here,” Saul, who is 80, told me, rather understatedly. “I had leftist politics, but I didn’t have any real artistic beliefs, you know? I just thought that modern art as it was presented—the clean design, clear thinking—thumbs down.” He frowned, and gave me a big thumb’s down. “I wanted it to have juice, you know what I mean? I wanted it to have weird stuff going on.”

Saul’s canvases are unquestionably weird. They also display a gleeful will to offend. One of the show’s earliest works, Custom Car (1962), features a sloppily painted car with a swastika on its side. He painted it and showed it Paris at the time, less than two decades after the city was liberated. The reaction? “They burst out laughing at the first show,” Saul said.

I asked if they were laughing with him or at him. “Who knows?” Saul deadpanned. “But I took it as a sign that my pictures were humorous instead of menacing, like I thought. I thought they were kind of like Ingmar Bergman movies and Francis Bacon—gloom, doom—but nobody else thought so. Lack of self-knowledge, I guess.”

As it happens, it’s far from the only example of Saul using Nazi iconography. “I had a picture called Hitler’s Bathroom, from 1960,” he told me. “It’s not as good. All it is is four toilets with swastikas on them—no big deal. Early attempts, you know what I mean?”

Hearing all of this was a rather peculiar experience since Saul has a grandfatherly charm, mixed with the obscure mischievousness of a black-sheep uncle. He was wearing a dark sweater, corduroy pants, and Asics sneakers, and has a full mop of white hair on head.

Saul was born in San Francisco in 1934 “in a house, like most houses in those days, with cheerful stories and pretty colors,” he said. He went to school at the University of Washington in St. Louis in the mid-1950s and then decamped for Europe, where he remained until 1964, returning to the Bay Area rather than New York, the center of the art world, or even Los Angeles, which was becoming a hotbed of activity.

In the years that followed, Saul became a remarkably tight painter—he’s long cited 19th-century academic painting as an influence—and he rendered his ever more twisted paintings with a precision that makes them especially pungent. It spills over into black comedy, so much work going into these grotesque melees. “People were definitely impressed by that,” Saul said. “I was hoping that people would notice the subjects, but you know I never succeeded in these years to get anyone to pay any attention to these subjects. They always said, ‘Oh, you’re getting tighter this year!’” (“I’ve concentrated heavily on ability to be illusionistic because major critics advise you not to,” he added, pretty much summing up his willfully contrarian worldview.

One may be tempted to dismiss Saul’s practice as an example of provocation for provocation’s sake, but there’s a potent political agenda in his work that is centered on total freedom of speech—transgression in the pursuit of artistic, even psychic, liberation. “I feel if the writers have the right to say anything then we got the right to do anything visually, but that’s not agreed with by a whole lot of people,” Saul said. “They’re trying to boss around the visuals, but not me!”

Saul puts vicious private fantasies on public display, enacting what someone, somewhere is no doubt thinking. Or so we suspect. He rubs racism, sexism, and xenophobia in your face. I love his paintings, and think they rank as one of the signal achievements of American postwar art, an improbable blending of surrealism, Pop, and comic styles. I also am deeply uncomfortable looking at them, knowing that a straight white guy is responsible, guiding the experience, doing the transgressing. His art forces tough questions about who has the right to cross various lines. (One thing he will not paint is the Prophet Muhammad: “Oh no. I don’t want a fatwa or anything like that,” he said. “No fatwa for me”)

“If you look some of these,” he told me, “like the Angela Davis with all of the knives in her”—that would be Crucifixion of Angela Davis (1973)—“that is startlingly problematical, probably, but what the hell, it’s too late now. I’ve already painted it, sold it, many years ago.”

“Have I been embarrassed by any of my paintings?” he asked himself. “Can’t think. Maybe once or twice.”

Saul is emphatic that, setting aside his occasional riffs on historical painting (his sporty 1976–77 version of David’s Napoleon Crossing the Alps is a choice example), he comes up with all of his wanton imagery himself. He explained how his feelings about his paintings often progress. “I have the idea for the picture, and when I see it getting there, I say, ‘Oh my God, it really is a problem.’ But then I just go through with it, and I don’t worry about it, you know?” The goal of his paintings, he explained is this: “It’s trying to be worth looking at.”

The works for the Venus Over Manhattan were all once owned by the late and storied dealer Allan Frumkin, who had galleries in Chicago and New York and supported Saul for much of his life by stopping by his studio once a year to buy a few works. (“He usually assured me that there were no sales whatsoever,” Saul said.) He’s also painting new pieces, for shows at the David Kordansky Gallery in Los Angeles in April and Mary Boone Gallery in New York in November, and still stretches his own canvases at his studio upstate. (An assistant builds the stretcher bars.)

Near the end of our interview, Saul and I walked by a large painting that has two men with gigantic, stereotypically Jewish noses—the body of one wrapped around the stomach of a naked black woman. The man’s body has the word “usury” on it, and the painting is titled, All the Money in Palestine (1969). And that’s just scratching the surface of the anti-Semitic imagery. It is an outrageous painting.

“I actually suffered from anti-Jewish prejudice when I was very young,” Saul admitted. Later on, but early in his career, he said, he made two or three paintings that involved the subject, including this one. “One of them is in a French museum,” he said. “It’s called Mr. Wall Street. It’s pretty good. This isn’t so bad. I wanted to wrap up all of the anti-Jewish stuff that I could think of.” At the time, the painting didn’t receive much notice, he said, and he wasn’t even sure if that show got reviewed, but that didn’t much seem to matter to him. He said, “It’s just sort of fun to deal with stuff, don’t you think?”

“Art of the City” is a weekly column by ARTnews co-executive editor Andrew Russeth.