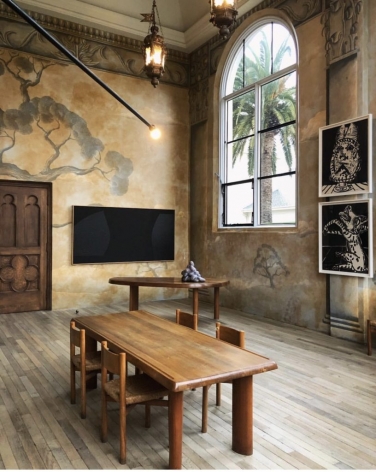 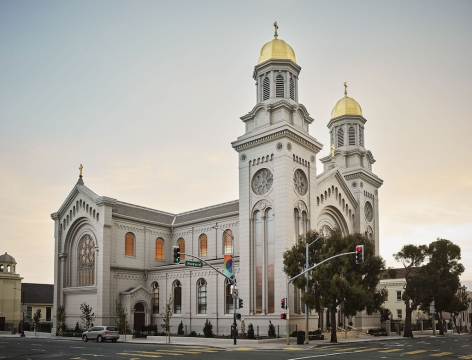 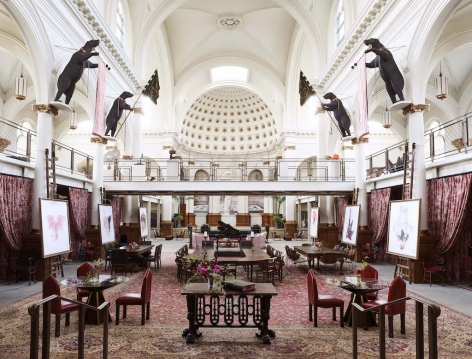 San Francisco’s grandest new art space is not a gleaming minimalist dwelling or futurist abode but a historic Catholic church that has been restored to an immaculate state after being abandoned for nearly 30 years. Or maybe not completely abandoned. “It was filled with pigeons and a homeless encampment and just neglect,” said Ken Fulk, the designer who purchased the building three years ago and remade it in such fantastical fashion. “It was raining inside.”

Now a long way from the earthquake damage it suffered in 1989, the church has been resurrected (Fulk’s word—“a good religious term,” he said) as the Saint Joseph’s Arts Society, an exhibition space and arts club with otherworldly furniture, a bar, and even a velvet-covered rope that visitors can pull to sound the bell up in a tower peering out over all the land.

Also inside, in time for the FOG Design+Art and Untitled art fairs in town this week, is an exhibition presented by the New York gallery Venus Over Manhattan in a small room with a storied past. “I wasn’t sure what a rectory was, but it turns out this is where something holy went on before the services,” Venus Over Manhattan’s founder, Adam Lindemann, said. “I thought if we have four walls—especially during FOG—we could do something interesting.”

The result is a spirited show drawing from a mixed congregation: the mid-century designers Charlotte Perriand and Pierre Guariche, the painters Alberto Burri and Maryan, and the sculptors Alexander Calder and Ken Price. “I tried to bring a a contemplative mid-century idea of minimalist thinking to the serene aspect of the church,” Lindemann said of a show that started with Perriand, who designed furniture for Le Corbusier and went on to a career as one of the most revered designers of the 20th century. A lamp in the show lived in her own apartment, and other of her pieces—tables and a desk with chairs, all in sumptuously amorphous wood—take up position around the room.

“I thought they would go well with these monochromatic Burris,” Lindemann said of two black, brooding paintings hung nearby. “They’re interesting to me because they’re from when Burri left Italy and moved to L.A. I think they have a West Coast feel.”

The show, on view through March 8, joins an array of other presentations in the church. A giant photograph by Catherine Wagner—some 30 feet tall and 50 feet wide—from a series of works devoted to Rome was commissioned specially for the space and hangs behind the altar. Upstairs is a new location for the design-minded Carpenters Workshop Gallery (also of New York and London), which has a show on view featuring works by the Milan-based architect and designer Vincenzo De Cotiis. “The drive is to try to demonstrate that these are way more than functional objects,” Carpenters Workshop director Loic Le Gaillard said of the programming he plans to present in San Francisco. “All these objects have their own narrative and emotion and reasons why they’ve been made. They’re as relevant as art.”

Also dispersed throughout the voluminous 22,000-square-foot environs are offerings by the Dutch duo Jaap Sinke and Ferry van Tongeren, whose work includes photographs and “fine taxidermy.” Animal heads hang all around, and a group of horse faces lies on a table burned black in tribute, an onlooker said, to the fire that destroyed Brazil’s National Museum in ‎Rio de Janeiro last year.

Of the newly launched arts space and its many parts, Fulk said the endeavor will take on 400 households as members under subscription—“much like you would subscribe to the opera or the symphony or any traditional arts organization.” The nonprofit 501 (c)(3) Saint Joseph’s Arts Foundation will present arts programming, education, and residencies. “And then there’s the Society, which helps keeps the lights on,” Fulk said.

Of the Saint Joseph’s Arts Society as a whole, he said, “Hopefully, collectively, it will be a gift to the city of San Francisco.”

View on ArtNews
Back To Top